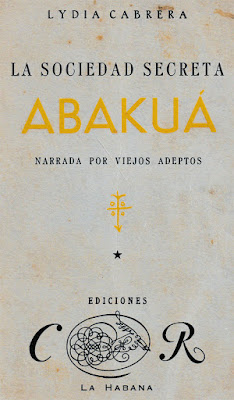 Cuban ethnographer and writer Lydia Cabrera (1899 Havana - 1991 Miami) created a new genre of historical literature by faithfully documenting the voices of Cuban African descendants and their ‘orature’ (oral literature). Starting in the late 1930s she sustained two decades of fieldwork to publish "La sociedad secreta Abakuá: narrada por viejos adeptos" [The Abakuá Secret Society: narrated by initiated elders] (La Habana, 1959). This is the first definitive account of the Abakuá mutual aid society, an institution which "gives us further evidence of the resilient strength of the values of this African legacy; located in Havana, in the capital of Matanzas Providence, and in the city of Cárdenas, with thousands of black, white and mestizo members” (from Cabrera's introduction to the book). The depth, breadth, and overall accuracy of this work makes it indisputably the most significant public documentation of African cultural influence from the Cross River region in the Americas during the trans-Atlantic slave trade.
The translation and supplementary annotations are by Patricia González (Smith College) assisted by Ivor Miller (University of Calabar, Nigeria) and Victor Manfredi (Boston University). Recently we translated Cabrera's “The Sacred Language of the Abakuá” which compiles over 6000 phrases that she collected while writing “The Abakuá Secret Society”. The terms ‘secret’ and ‘sacred’ are used interchangeably in these titles, referring to the privileged information learned by initiates, and also the ‘sacred’ nature of African heritage as enacted in ritual performance.
Cabrera dedicated this book to Pierre ‘Fatumbi’ Verger (https://www.pierreverger.org/en/), pioneering French historian, ethnographer and photographer of Brazil and West Africa. Verger visited Cabrera in Havana in 1957, and she used many of his photographs as illustrations. 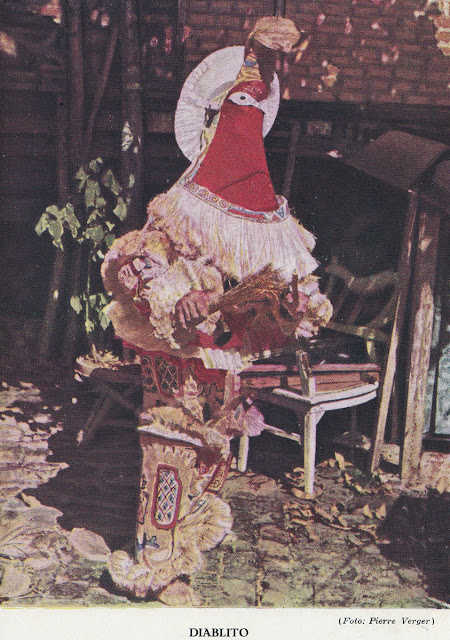 The title of this image -- “Diablito” (‘little devil’) -- is used in Cuban popular speech, whereas Abakuá initiates would refer to an Íreme ‘body mask’. The notion of "little devil" comes from medieval Catholic Europe, where saints’ day processions were mobile performances representing ‘virtue’ and ‘sin’ to the public. As Africans arrived in Seville starting in the 14th century, their masking practices were incorporated into processions by the Catholic brotherhoods as representations of so-called ‘sin’. In colonial Cuba, Spaniards derided Abakuá masked performances, oblivious to or purposely ignoring the intentions of their creators to represent honored ancestors who form part of the community of initiates.

Another problematic expression referencing this culture is ‘ñáñigo’, used in the title of Cabrera’s Abakuá vocabulary "La Lengua Sagrada de los Ñáñigos". This was originally a Cuban ethnic term, probably derived from 'ñanya' a name for the Abakuá body mask (< Èfị̀k nyànyá). However in Cuban popular speech ‘ñáñigo’ came to refer vaguely to any person of the black working class or its ‘underworld’. Contemporary initiates reject this usage and prefer to be called Abakuá.

Considering the complex relationship of the Abakuá culture to its historical sources in the Calabar region of Nigeria and Cameroon, we will add an appendix of African etymologies (to the extent known) and further explanations from living Abakuá members. This supplementary information is clearly distinguished in the notes from the translation of Cabrera’s own words in the main text.