Darlington “Duke”, a highlife musician from Bayside (Àtákpà), Calabar, Nigeria, generously guided me through the history of popular music of Calabar. Darlington was the band leader at the famous Luna Night Club in Calabar until it closed in the 1990s. With the Luna Professionals Band, Darlington recorded "Eka mi inyeneke mkpo", a great example of Calabar highlife with the èkọ̀mbì rhythm. While used traditionally to celebrate the presentation of maidens emerging from the "fattening room" after months of seclusion and training, in this highlife context, èkọ̀mbì is used for enjoyment and symbolic of Èfị̀k culture. What is interesting in this "modern" highlife song, is that the "traditional" theme of a local Ndem spirit is evoked playfully, signaling the persistence of traditional belief in spite of a booming industry in Christian churches.

Ndem Efik mo di onogho eka mi inyeneke mkpo,
Èfị̀k goddess, as you know, my mother has nothing,
Inyeneke nsenunen uwa idiong
She has no native egg to sacrifice
Inyeneke ebot nko.
Neither does she have a native goat.
In Calabar, Darlington presented a weekly radio program called “Highlife is Alive!” From 2004 onwards, he helped me collect an impressive array of vinyl recordings on 78, 45 and 33 rpm discs that embody the musical legacy of the Calabar region. At the end of this report is a transcription of Darlington’s narration of his own musical biography within the history of Calabar urban highlife. 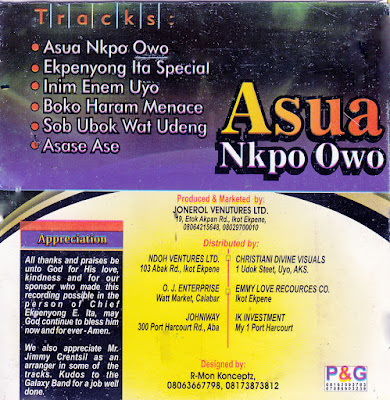 Darlington's recent and last CD release has the following tracks, mostly in the Èfị̀k language:
“àsuá nkpó owo” ("Envious People")
“Ekpenyong Ita special”
“Inim Enem Uyo” (“Sweet Parrot Song”)
"Boko Haram Menace"
“Sob Úbók Wàt Údèng” (“Paddle Fast”)
“Asase àsè” (“Achievements”)
In 2004, Etubom Bassey Ekpe Bassey introduced me to Darlington in my quest to understand the musical heritage of Calabar. Because important episodes of the history of Afro-Cuban people are embodied in Cuban popular music, I wondered what could be learned through a comparative study of Calabar and Cuban music. Collecting vinyl in Calabar was the West African side of a comparative study of trans-Atlantic musical continuity and innovation. But as I’ve experienced over and over in Calabar, the lack of serious research into the cultural history of the region requires documenting that history before embarking on a comparative study of the Americas.

In 2004, Darlington introduced me to Mr. Demmy Bassey, an Èfị̀k highlife musician and composer who played in Ghana in the 1960s. Bassey (d. 2007), was a member of the Èfé Ékpè Ìyámbà lodge of Àtákpà, and a descendant of Chief John Coco-Bassey (d. 1899) a famous Èfị̀k-speaking trader who traveled as far as Sierra Leone, and worked with the British colonial administration (Oku 1989: 210).
Demmy’s compositions were recorded with the following Ghanian highlife groups:
1) Black Beats of Ghana recorded “Abasi do” (There is God) on Sept. 6, 1960 in Accra.
2) Members of the Black Beats formed the Ramblers Band, which recorded “Se eyen mi do” (Take Car of My Child) in Ghana in 1964.
3) E.T. Mensah recorded “Keyere Móng” (Go and Take Your Bath).
Demmy’s career demonstrated many links between Ghanaian highlife and Calabar, a phenomenon until now undocumented. Demmy Bassey had several recordings in the Èfị̀k language, including:
Demmy Bassey. “Tin Akpan Iko, the best of Demmy Bassey.” Phonogram seteo (PL) 119. Lagos.
Demmy Bassey. “Inyang Nta Demerede: Tribute to Chief Inyang Thomas Henshaw.” Calabar, Nigeria.
Bassey’s tribute to Henshaw gave respect to an Èfị̀k musician in Lagos who composed and recorded at least ten LPs of highlife in the Èfị̀k language, often using the popular èkọ̀mbì rhythm of the maiden’s dance of Èfị̀k communities, parallel to the Moninkem dance of maidens in Éjághám speaking areas. Darlington told me:
“In Lagos, Inyang Henshaw was the main Èfị̀k son who was doing very well in Highlife and èkọ̀mbì music; he had so many records to his credit. He was the recording manager to Phillips Recording Studio in Lagos until he passed on. Another group in Lagos was the Calabar Cultural Party.”
Through Darlington’s musician networks, he identified many personal archives of vinyl in the Calabar urban region and into rural villages. We visited the family homes of musicians, most of them deceased, to dig through dusty boxes of vinyl, seeking recordings in the languages of southeastern Nigeria. We found them in Èfị̀k, Éjághám, Ìbìbìò, Ohafia (Cross River  Ìgbò), Qua, and other languages.
Darlington reported: "In terms of traditional cultural music, Ekpe Ita was the lead musician to record the real typical culture of the Èfị̀ks. After him there was another group known as Nka Okop Unen Ike, playing the same way, but Ekpe Ita had the upper hand in that culture." 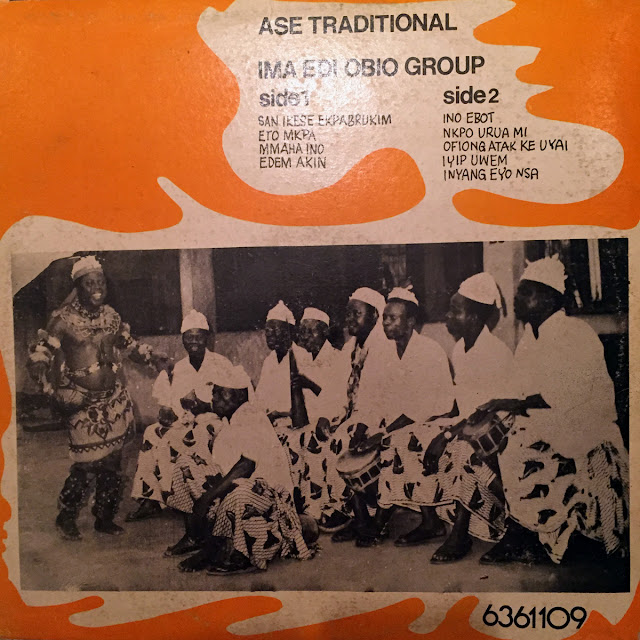 Some of the LPs were recorded by local cultural troupes playing initiation club music of the rural villages, like the following: 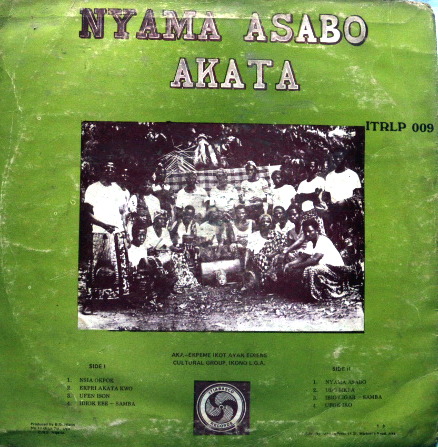